MPC-HC is not under development since 2017. Please switch to something else.

Thanks to Certum binaries will be digitally signed!

Starting from nightly build 1.6.6.6735 (fceef5c) the binaries are digitally signed. You can easily verify that the file you downloaded hasn’t been modified in any way, by verifying its signature. The stable version 1.6.5 isn’t signed since I got the certificate at a later time. So for stable builds, version 1.6.6 will be the first one signed.

After downloading the files, right-click on the installer or the exe/dll files after you extract the archive and choose “Properties” from the explorer’s context menu. In the properties dialog, go to the “Signatures” tab and verify that the file is signed by “Fotis Zafiropoulos” and that the signature is valid. If you don’t see the “Signatures” tab, then the file isn’t compiled by us since it’s not signed, and thus you downloaded a custom build or a potential scam file. 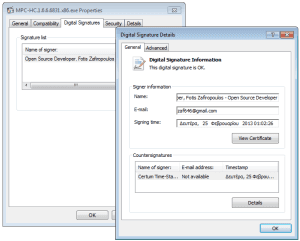 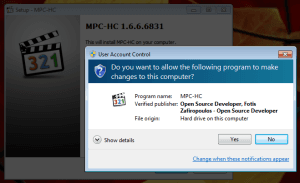